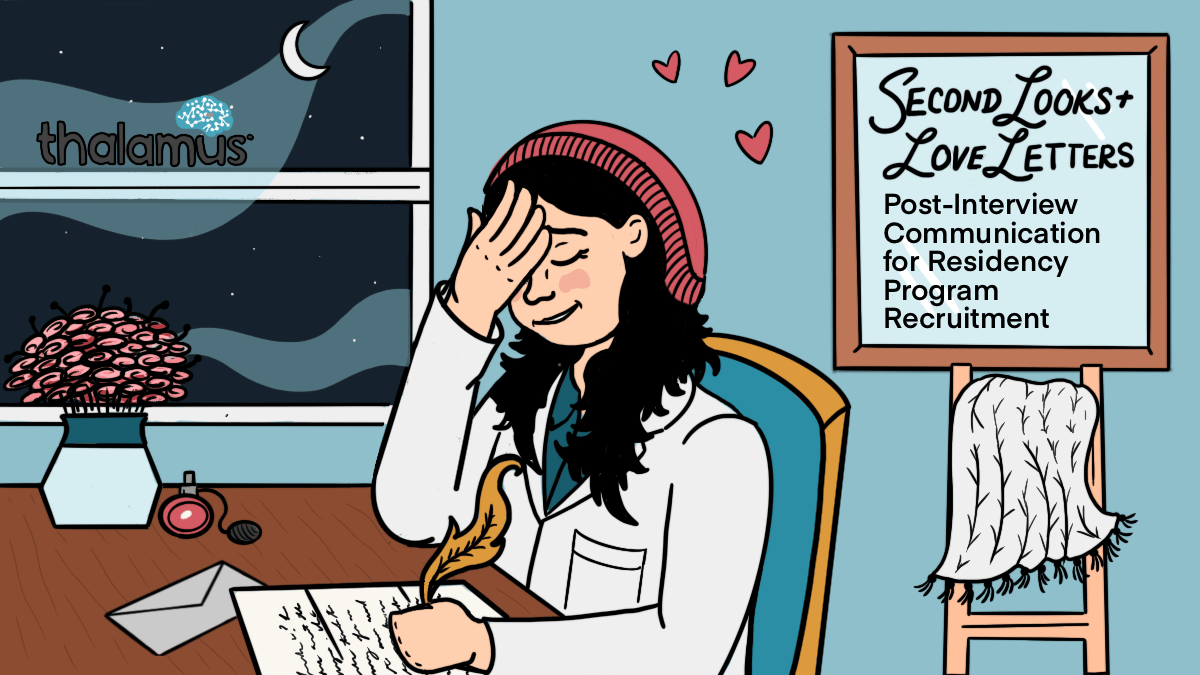 As the residency application process winds down and approaches Match Day in mid-March, candidates begin composing their finalized rank lists for the National Residency Matching Program or SF Match or AUA Match.

During this time, candidates begin making life-altering decisions that will ultimately affect where they spend the next three to seven years of their professional journey, depending on their specialty. Not only will their final rank list determine the desirability of the institution where they ultimately match, but additional variables are also considered including proximity to family/loved ones/significant others, cost of living, general fit, and many others. The stakes are high.

Given the importance of these decisions, candidates attempt to gain any edge possible by communicating their desire to attend programs of interest. And from this, two predominant forms of post-interview communication, as it is formally known, have emerged:

Regardless of which method (or both) are used, post-interview communications provide candidates a means of expressing their overall interest in attending a program.

But what’s the real story with post-interview communications? Are they allowed? How prevalent are they? Do they really work? Should I use them as a candidate?

These are the questions we hear each year from candidates. Thus, here are Team Thalamus’ recommendations regarding second looks and love letters.

The NRMP has detailed regulations regarding the match process, most of which pertain to post-interview communications and is outlined in their “2020 Match Participation Agreement for Applicants and Programs 2020 Main Residency Match.”

Key sections have been presented here:

6.1 Duty to Act in a Professional and Ethical Manner:  All participants in the Main Residency Match shall conduct their affairs in an ethical and professionally responsible manner. The duty under this Agreement to act in an ethical and professionally responsible manner extends throughout the application, interview, matching processes, and SOAP and until the 45th day following the start date of training in the appointment contract or the conclusion of any NRMP-related waiver review, violation investigation, or appeal process, whichever is later.

6.2 Restrictions on Persuasion: One of the purposes of the Main Residency Match is to allow both applicants and programs to make selection decisions on a uniform schedule and without coercion or undue or unwarranted pressure. All participants in the Match shall respect the right of applicants to freely investigate program options prior to submission of a final rank order list.

Both applicants and programs may express their interest in each other; however, they shall not solicit verbal or written statements implying a commitment.

Applicants shall at all times be free to keep confidential their ranking preferences and the names or identities of programs to which they have or may apply.

The NRMP recommends that each program director and applicant read carefully the Match Communication Code of Conduct for information on acceptable methods of interaction during the interview and matching processes.

In addition to this official match participation agreement, specialty-specific organizations such as the Alliance for Academic Internal Medicine (AAIM) have published more informal guidelines to “strongly encourage” best practices. This includes training templates and suggestions for program statements to address post-interview communications.

Team Thalamus’ Take:  Post-interview communications are allowed by both applicants and programs as long as they abide by the above official NRMP criteria and do not constitute a match violation.

How prevalent are post-interview communications?

Key findings are as follows among respondents.

Students also reported that programs communicated to them:

Further, 18.6 percent of candidates reported “feeling assured” of matching a program that they ultimately did not match at, despite ranking that program first on their rank order list. 23.4 percent also reported altering their rank list based on such communications.

The studied concluded that non-binding communications were frequent and advised applicants to interpret comments with caution. The authors also admitted that “reported violations of the NRMP’s Match Participation Agreement were uncommon.”

Team Thalamus’ Take: While a relatively small sample size compared to the tens of thousands of applicants that match each year, based on other studies and anecdotal work, post-interview communications are indeed quite prevalent, highly varied in content, accuracy, honesty, audience and other key application criteria.

In a study published in the Journal of Graduate Medical Education (JGME) in 2014, one residency program collected all post-interview correspondence over a two-year period.  They found that applicant post-interview correspondence had essentially no effect regarding position on the program’s rank order list of candidates. Interestingly, of the 16 applicants who communicated they would rank the program first (and were ranked in the program’s final match range), five did not match—suggesting misleading statements that likely violated the NRMP participation agreement.

While this is only the experience of a single residency program, the perspective is anecdotally prevalent based on Team Thalamus’ interactions with the >600 GME programs we currently support during interview season.

The applicant’s perspective is nuanced and, not surprisingly, seems to vary by specialty, institution, etc. For instance, in Emergency Medicine, a 2010 study (n = 240/706, 38 percent response rate) found 91 percent of candidates reporting being contacted by email and 55 percent by phone. 51 percent reported that their final rank order changed because of this correspondence.

In pediatrics, the University of Washington Pediatric Residency Program conducted a study from 2003-2006, where they instituted a “No Phone Call” policy for post-interview communications. They found that 10.3 percent (n=468) of interviewees reported that they would be favorably influenced by receiving a post-interview telephone call.

Team Thalamus’ Take: So while there is interesting data on both sides of the equation, studies overall are limited and sample sizes are small. However, the lessons learned do not stray far from reality. Most specifically, “love letters” from applicants to programs are less influential for final rank order lists vs. post-interview correspondence from programs to applicants. Since both communications are non-committal and non-binding, it opens up possibilities for misleading statements on both sides that can ultimately affect match outcomes.

To put it plainly, one fourth-year medical student submitted a well-written perspective on the possibilities of using post-interview correspondence to “game the system.”  He makes strong points, albeit playfully, and ends his article by discussing how he sent a post-interview communication anyway!

Should I use post-interview communications as a candidate or a program?

Team Thalamus’ Take:  As we’ve written about extensively, there are many components that dictate the final result of the residency match process. Most importantly, the NRMP match algorithm is “candidate-favoring” in that the final match is ultimately determined by the choice of the candidate, with the choice of the program being a secondary measure.

As such, there is likely greater impact when an applicant moves a program one spot up or down on their rank list than the equivalent action done by a program. And thus, it seems that program “love-letters” likely have a greater overall impact on final match outcomes.

This said, our paramount suggestion is that to ensure the integrity of the match process, as well as the overall well-being of all involved, programs and applicants should try to remain as ethical as possible in post-match communications. Messaging should be both honest and accurate, as well as abide by the NRMP participation agreement. We hope that all specialties come up with similar guidelines—not to “police” the process, but to provide more accurate information for all involved.

And given the extent to which application inflation and over-invitation have impacted recent residency recruitment, it has become more challenging for applicants and programs to express their true interest to one another. Post-interview communications that are honest, accurate, and reserved for specific applicants/programs can be quite effective in communicating interest in a program/applicant. This can be especially true for applicants trying to match to a distant geographic area, programs recruiting  non-traditional applicants, or any other number of “outliers.” In a process full of numbers and algorithms, humanity and a well-conceived message can make all the difference.

Final answer:  Post-interview communications that are accurate, honest, abide by NRMP regulations and specialty guidelines, and are used solely to express an interest in a small subset of applicants/programs are useful. Nearly every MD/DO member of Team Thalamus sent love letters in this regard (one was accepted to a program that had a strict “no post-interview communication” policy). And while we are unclear on their overall impacts, nearly all of us ended up attending that residency program. So trust your gut, write from the heart and best of luck as Match Day approaches.

And as always, Thalamus is here to help schedule the interviews that eventually lead to such post-interview communications. We work with over 135 institutions and nearly all applicants each year (and growing) to streamline the interview scheduling process.  Want to learn more about Thalamus?   Please contact us at sales@thalamusgme.com or reach out to us through our website—we’re happy to discuss further.