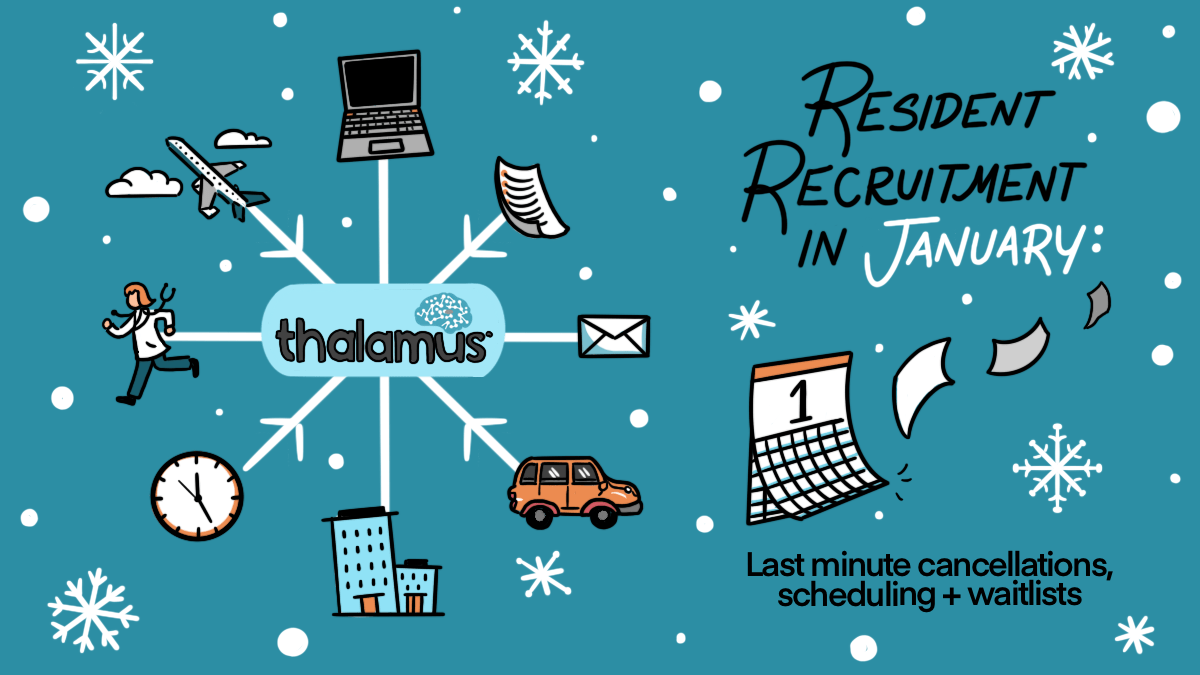 While the residency recruitment and interview process can be thought of as a single application season (starting on September 15th with the opening of ERAS and lasting until Match Day, the 3rd Friday of March or otherwise for SF Match or AUA specialties), it is significantly more segmented.  In reality, the process is represented by several individualized “sub-seasons.”

Here we lay out the notable parts of the recruitment season, and highlight the importance of January for programs and candidates alike.

Programs send out the majority of their invitations. Candidates sign up quickly for positions in a zero-sum game. As we have written about previously, application inflation and over-invitation have contributed to an even more competitive environment during these months, as well as increased costs all around.

At this point, the interview trail has begun for the majority of specialties. Candidates travel all over the country. Programs interview their early cohorts. All involved adjust to the cadence of the interview process.

As well as celebrating Thanksgiving and preparing for Christmas, the medical community has the tail end of interview season to think about. As the year draws to a close, residency interviews are limited. By this time, candidates and programs are usually in one of two camps respectively:

What occurs during the first month of the new year is remarkably different than any other time period during the interview season. Cancellations start occurring in mass across all specialties, geographic areas, and perceived program reputation. Previous interview positions that were gobbled up immediately now start going vacant, resulting in significant waitlist movement. And in the end, nearly all programs in residency recruitment have unfilled interview dates in January!

The reasons for this are varied but include:

This then opens positions for candidates who have been on waitlists or are invited later in the interview season. These candidates tend to have fewer interview offers on average, but now have an opportunity to increase their pool of possible matches with later interviews at more programs.

And thus begins the second leg of interview season

As the season goes deeper and deeper into January, the prospect of the interview season ending becomes a certainty. And with each passing week, more applicants hit their personalized “magic number” and decide that they have interviewed at “enough” programs. Unfortunately, given the high costs of the interview season, some candidates end up exhausting their funds on last-minute flights that are quite expensive. Other candidates may never acquire additional interviews.

So what makes January special?

This is inevitable and has historically been a controversial topic. For programs, there is a perceived pride in filling their interview dates. Also, program coordinators have often gone to great lengths to organize candidate schedules and interview days, program directors and other faculty have scheduled time away from clinical duties to ensure interviewer availability, and there is a significant cost to interviewing candidates (which can eclipse $10,000 per matched applicant).

There are certainly professional and less professional behaviors and practices when it comes to cancellations. While there is no current unified standard amongst the governing bodies as to what defines professional behavior, some specialties have begun proposing specialty-wide practices, such as APGO/CREOG in OB-GYN. As these processes continue to evolve, we have recommended the following as a minimal set of guidelines.

In these cases, other candidates could have very well taken this interview spot. The program is left with unfilled positions and under-utilized faculty. This decreases the program’s pool of possible candidates to match while increasing their costs. It should be avoided by applicants entirely.

Further, and important to note, the medical community is small and word gets around easily. Treat programs with respect, because you’ll never know who knows who and which programs will bring up issues of professionalism amongst applicants back to advisory or academic deans. You may even cross paths with that program again for fellowship interviews or during the job search as an attending. Similar courtesy in terms of rescheduling is recommended for programs when applicants run into a legitimate issue or emergency (familial death, travel complications, etc.).

Programs should reciprocate and not switch or cancel interview dates as situations allow, given the high amount that applicants spend on travel and other interview costs. This is an unusual job search where the cost of interviews falls directly onto the interviewees (which is unusual for most industries). Given that currently tools which could provide candidates better insight into matching are limited (stay tuned for more from Thalamus… 😊 ) and that application inflation and over-invitation has gotten worse with each passing year, programs should be understanding when candidates cancel—assuming they do so in a courteous and professional manner that accommodates your program’s process.

As more candidates cancel, spots turn over more rapidly. This leads to last-minute scheduling. Depending on the interview experience in October, November, and December, some programs may also open additional spots in January. Others allow for overbooking of interview days in January, recognizing that cancellations will occur.

This opens the possibility of last-minute scheduling. While Team Thalamus is in the process of analyzing data to assess if match rates change based on month of interview, anecdotally we’ve heard of several accounts of programs’ best residents interviewing as late as the last interview day of the season, including eventual chief residents.

Similarly, as candidates interview at more programs it may be that their schedule only allowed travel to your geographic area at that time versus earlier in the season where they may have been traveling on another coast, or in an alternative region or time zone.

And while some programs may be open to adding an extra spot or working with candidates to ensure available interview positions, it is also important to remember that candidates should not be overly forceful in trying to secure interviews.

For programs that invite many more candidates than they have available positions, there may not be enough open positions to accommodate everyone. This is a decision made directly by the program. And while it may stray from best practices, it is the program’s choice to do so. Applicants, please recognize these points as well.

Again, professionalism matters and should be shared on both sides of the interview transaction. Further, recognizing these points is also helpful:

In the days prior to online scheduling systems, program coordinators would keep a running waitlist of candidates. When a spot opened, the coordinator would then have to reach out to candidates by phone or email each individually to see if a spot could be filled. The process was (and for some programs still is) cumbersome and time-consuming.

Interview scheduling software such as Thalamus allows for streamlining of the waitlist process.  While some solutions allow for automated filling of waitlists, we have found this can result in suboptimal filling based on simulations, modeling, analytics, and experience.

It is for this reason that Thalamus offers the most flexible waitlists in GME, by allowing programs to select between different types of waitlists: “Ordered” and “Pooled.”  Flexibility allows programs to select a waitlist type based upon their recruiting goals, with each having its own benefits and costs for programs and applicants alike.

Pros: Open positions are reserved for the next candidate on the list. Programs have the ability to order the list for more strongly preferred candidates or candidates who have shown added interest in the program. Applicants have a defined time interval.

Cons: Cycling of the waitlist can take extended periods (on the order of weeks to months) given the length of the list and time interval set by the program. Positions offered overnight may allow candidates less opportunity to respond to waitlist openings. Candidates overall see less waitlist movement from a global perspective.

Pros: Any open spot is offered to all candidates on the list, which allows for rapid filling of positions. Candidates are notified of all openings and have an equal chance of securing a position. Waitlist cycling does not take a long time.

Cons: Long waitlists can result in rushed scenarios for candidates to respond to secure a position before others on the list. For this reason alone, this wait list type is not recommended for programs that have waitlists of greater than five to ten candidates.

Why Thalamus doesn’t use automatic waitlists

As presented in this post, the residency interview season can be broken down into many sub-seasons. Early on, automated scheduling may be convenient in certain instances—when candidates are most aware of their placement on waitlists for certain dates. However as the season extends, candidates may either forget that they are on a waitlist and/or not cancel themselves from a waitlist, even though they are no longer considering matching at a particular program. For the former, if a candidate is switched off of a prior date for a waitlist opening, they may lose a previously booked flight or hotel (and this happens more frequently than should).  For the latter, it requires significant management from the program coordinators to ensure the waitlist continues to function and that candidates not interested in interviewing are removed promptly.

January is very different to the remainder of the residency interview season due to increased cancellations and scheduling of interviews as well as a greater reliance on waitlists. Positions that were previously deeply coveted may now suddenly go unfilled as waitlists cycle through the final month of the interview season. It is important that candidates and programs are aware of these unique issues, so that they may best manage the conclusion of interview season leading up to the match.Thalamus streamlines this process for both candidates and programs. Our software incorporates and optimizes this process, and as such is the most-preferred interview management solution in GME.  Want to learn more about Thalamus? Contact us at sales@thalamusgme.com or request a demo.